Here is a highlight of our winter farming adventure - our earthworms made it safe and sound to their new home! I really long to expand my little animal collection that I have in my backyard but being a suburban farmer means you are limited to space and neighbors' tolerance. I believe earthworms in a box is a safe addition right now :-) 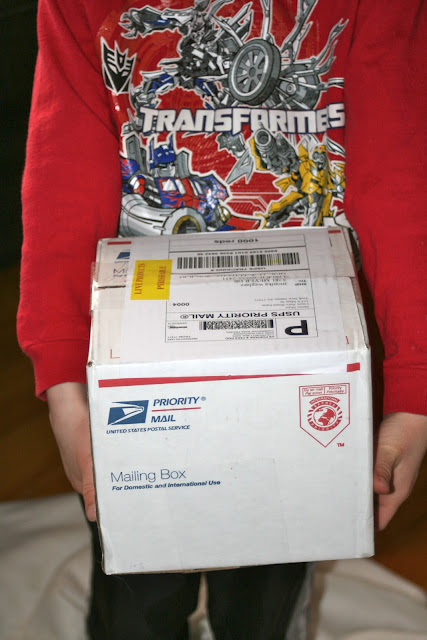 I have been reading a book that is called Project Based Homeschooling, written by Lori Pickert and I absolutely love it! I love the idea of having the kids pick their project and work on it in their own pace with their own ideas. When I mentioned to them that I wanted to start an earthworm farm to have some treats for our chickens and valuable nutrition to our garden beds, they were on it at once. T did the research with my help and we were good to go. 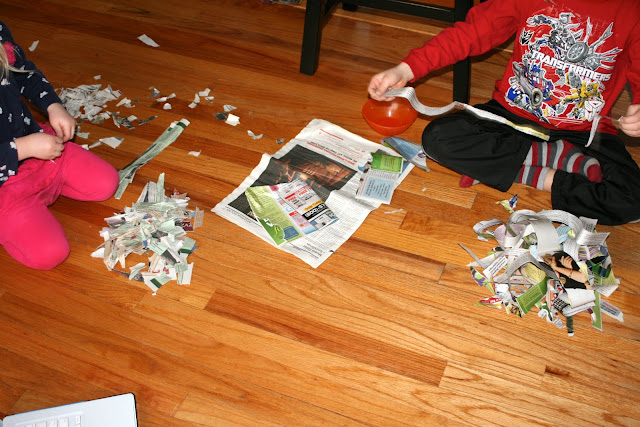 When the worms arrived they knew they had to add some newspaper bedding to the peat moss we already put into our plastic bin. What is a better activity than tear a newspaper apart? 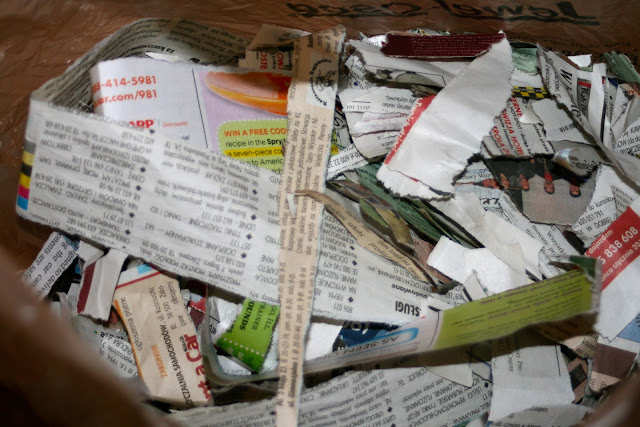 When they were finished they wanted to decorate the worms' new home. They wanted to name their worms but I suggested it might be difficult to recognize them among the 998 other worms that all look very much the same... 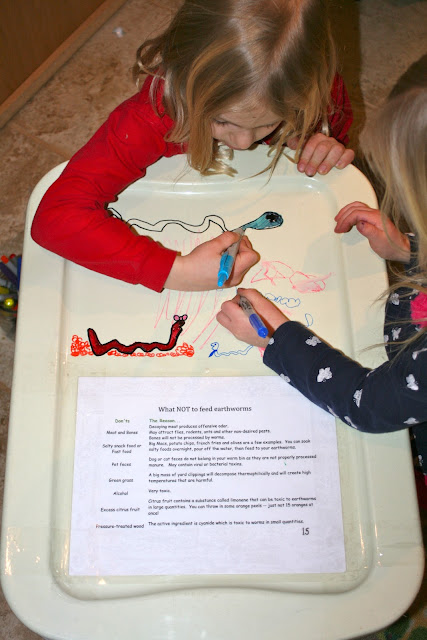 Here is the final look :-)
I still had to drill some tiny holes into the box because I had lots of worms gathering by the lid opening and the suggestion was that there is not enough air or it might be too moist inside. 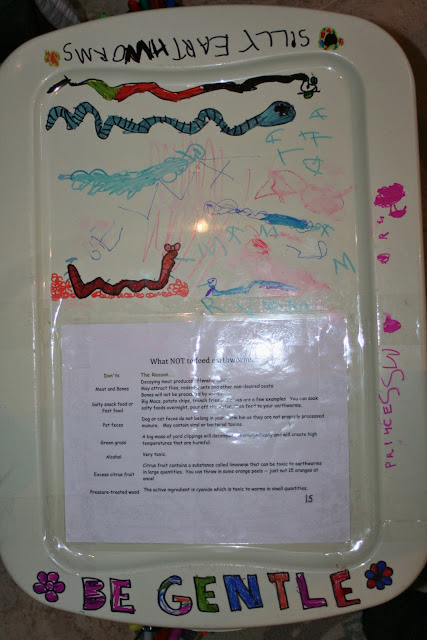 Before we added the newspaper, we moistened the peat. 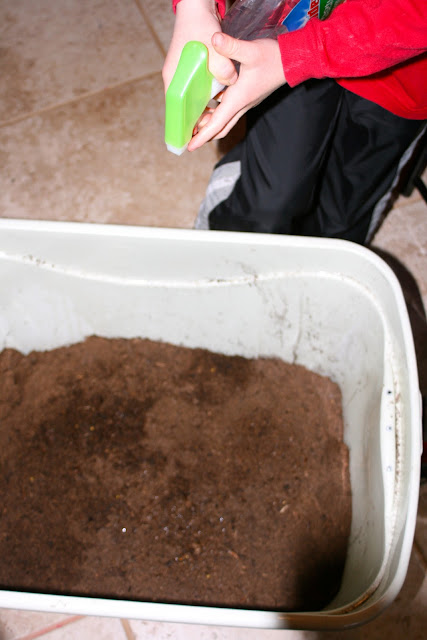 Next came the newspaper. 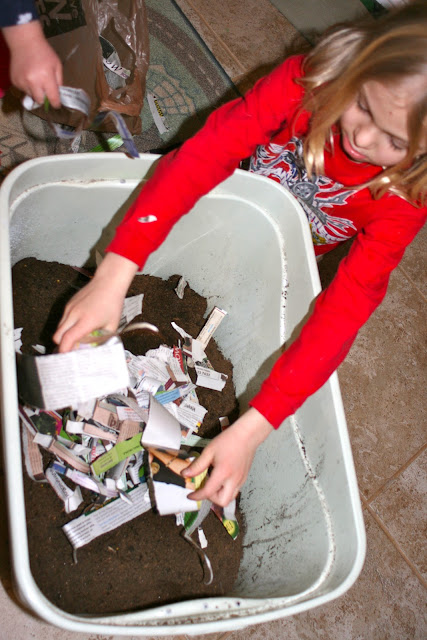 And then some food. And spray some water over it again. you are not suppose to use regular tap water so I used our filtered water. 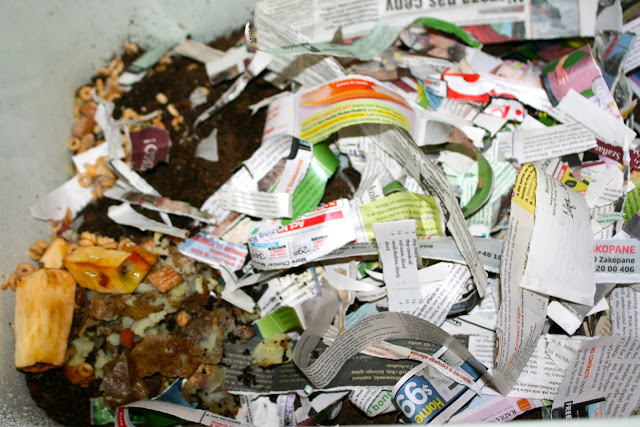 To be honest, we weren't quite sure what to expect when we open the bag... but we decided to be brave ;-) It wasn't so bad - bunch of worms all in one pile with some wet peat. Actually kind of cool! 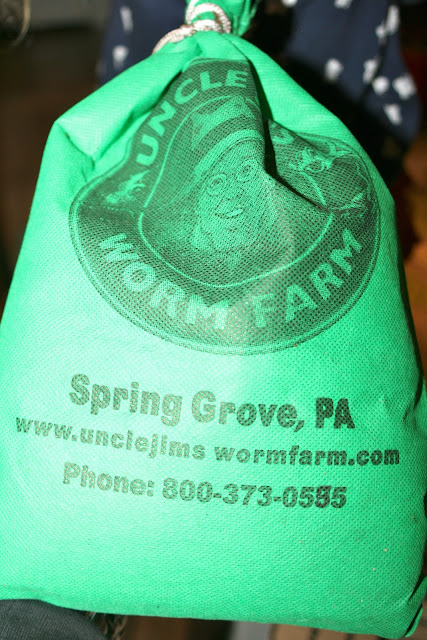 The kids loved handling them and digging in the bin to try to find more of the worm bunched up in one spot. And just to think that almost a year ago they were both afraid of them :-) 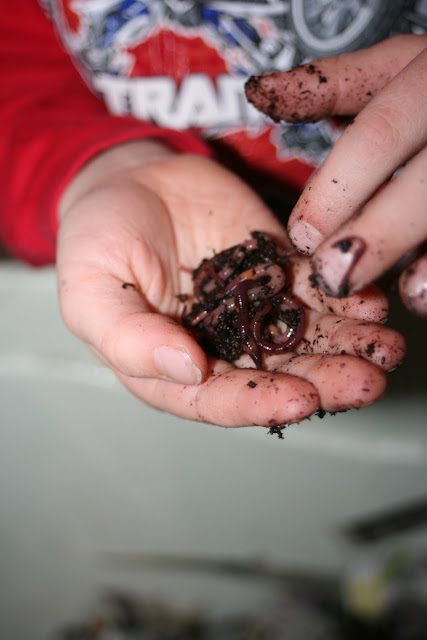 Final look at the group! 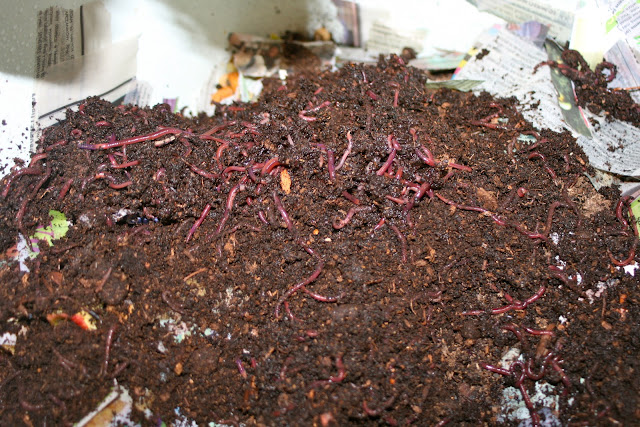 glad you’re enjoying the book! :) your worm farm is awesome!

Lori, thank you for stopping by! I have been letting go a bit since i have been reading your book. And I am enjoying watching the kids at work more on their own. THANKS!!!

Thank you for sharing with the Clever Chicks Blog Hop this week; I hope you’ll join us again!

I have worms too! (you wouldn't think that was a good thing...!) I love them, they don't make a bit of noise and never complain about the meal! They are great little "recyclers" and make awesome compost!!

Melody! They are tons of fun... especially for the kids.